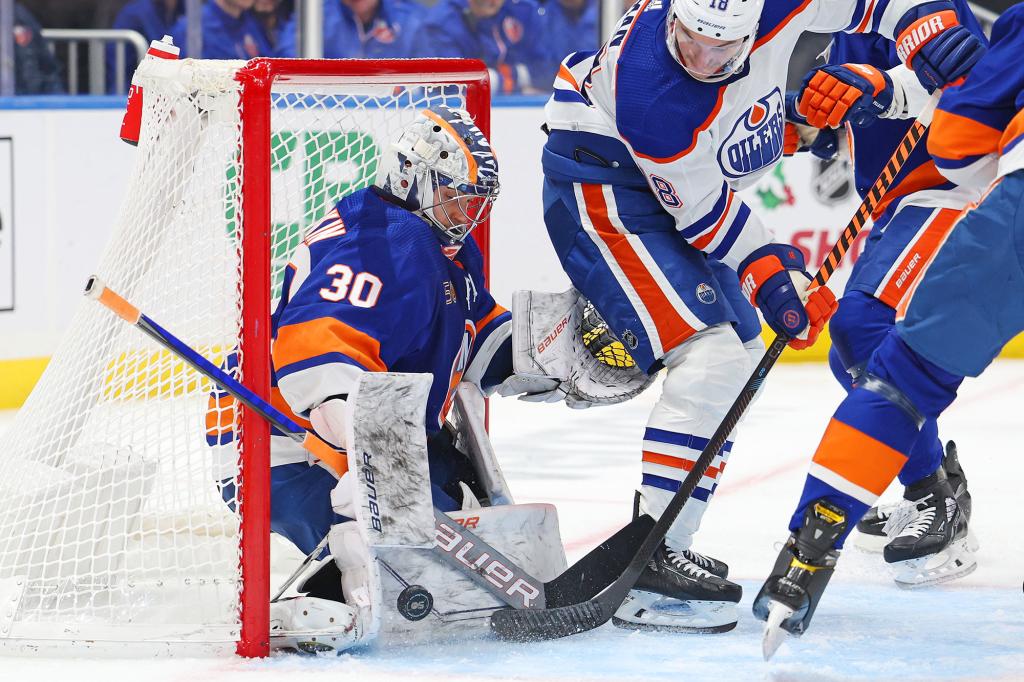 Ilya Sorokin may not have been on the Vezina Trophy radar before, but he certainly is now.

Against a high-powered Oilers offense, Sorokin turned in what might have been the best performance of his young NHL career — a 49-save shutout to key the Islanders to a 3-0 victory, their second straight heading into Thanksgiving.

There is a case to be made the victory was the Islanders’ best performance of the season as a team. They controlled the game from start to finish against a powerhouse opponent. But it would not have happened without Sorokin.

Through a successful first quarter of the season, with the Islanders’ record sitting at 13-8-0, Sorokin has been the biggest reason behind the success. The Islanders have played a better, more offensive game — and did so on Wednesday, as well. Nevertheless, this victory and the season success would not be possible without consistent stalwart performances from Sorokin in goal.

“He’s a pretty special player,” Cal Clutterbuck said. “He’s showing it night in and night out. And just makes you want to go out there and make him face as little as possible. Boy was he there tonight.”

The victory ended up turning on an Islanders’ penalty kill after Anthony Beauvillier was sent to the box for slashing at 4:11 of the second period. Jean-Gabriel Pageau converted the Islanders’ second shorthanded goal of the season on a feed from Zach Parise just 22 seconds into the Oilers’ power play.

And when the Islanders got a turn on the man=advantage after Tyson Barrie held Cal Clutterbuck at 5:27, Pageau scored again, his feed to Anders Lee being knocked in off the stick of Evan Bouchard.

Even when the ice started to tilt in the other direction toward the end of the period, the Islanders had a ready answer. Oliver Wahlstrom went the other way on the rush, staying strong on the puck and finding an oncoming Sebastian Aho from behind the net to make it 3-0.

And then there was Sorokin, who was superb.

“What this game came down to is we were unable to solve their goaltender,” Edmonton coach Jay Woodcroft told reporters. “Pouring 49 shots on someone, that’s what we set out to do every game. We didn’t find a way to crack him.”

“Is it his best game? I don’t know,” Islanders coach Lane Lambert said. “But it certainly was a tremendous game from him. He’s focused, he’s dialed in and he’s quick. He made some huge saves for us.”

“I don’t think about this,” Sorokin said, asked if it was the most comfort he has felt in the NHL. “Again, tomorrow, I [could] feel like s–t.”

Thanksgiving is still early in the season, and there is a long way to go for the Islanders. Record aside, there are questions around the group, which has leaned on goaltending to sweep aside a high number of chances allowed all year and could be helped by adding a high-level wing.

The Islanders are playing good hockey on a consistent basis, however, and turned in the sort of 60-minute effort on Wednesday that has often been missing. They are regularly beating teams that made the playoffs last season, and look on track to return to the postseason after missing out in 2021-22.

Perfection, after all, is not necessary. The Islanders have the kind of goaltending that can let them get away with much less.

The case for a Yankees roster reset if Aaron Judge leaves