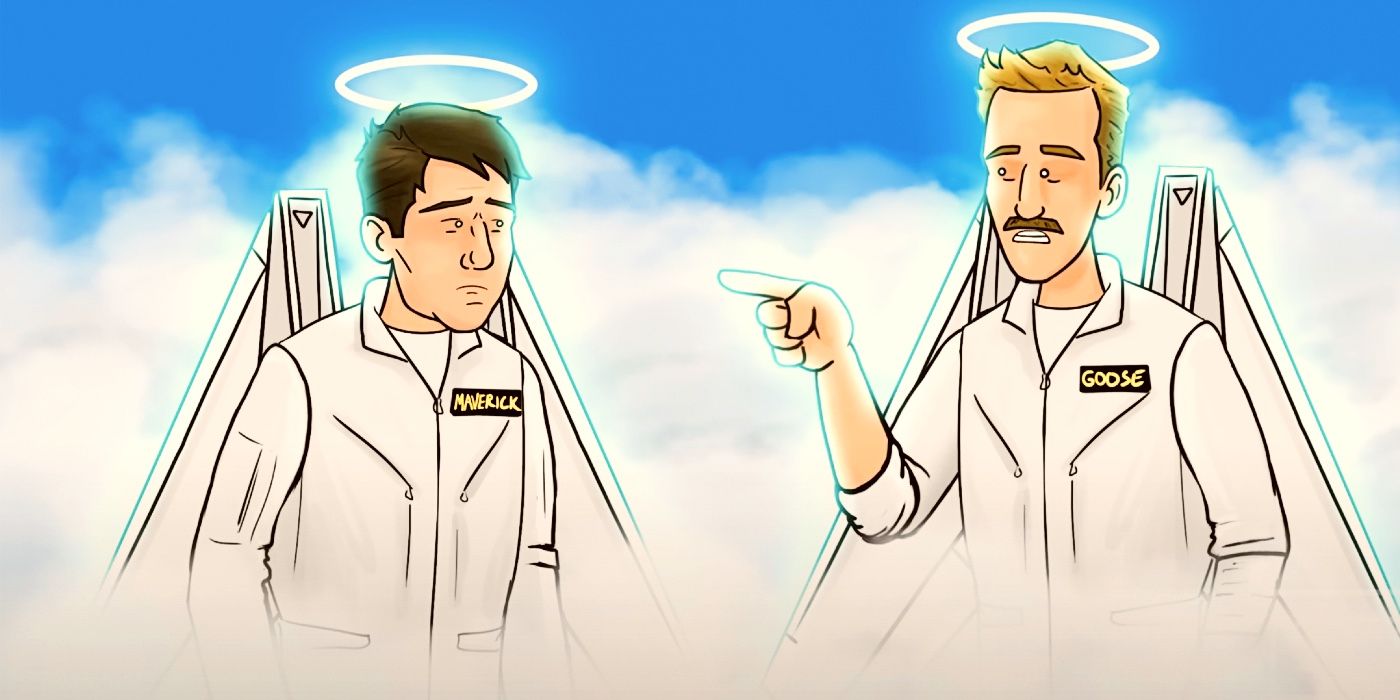 Top Gun: Maverick’s hilarious How It Should’ve Ended video sees Maverick reuniting with his former RIO Goose in the sequel many times.

Top Gun: Maverick‘s How It Should Have Ended video shows Maverick reuniting with Goose so many times. The sequel to Tony Scott’s cult classic Top Gun, Maverick was more than three decades in the making, but it proved to be worth it. The Joseph Kosinski-directed movie was not only critically-acclaimed, but it was also a massive box-office success for both Tom Cruise and Paramount. The film reunites fans with Maverick as he deals with some of his hang-ups from the past, including the unexpected death of his former RIO, Goose. His feeling of guilt was exacerbated by having to work with his dead flying partner’s son, Rooster.

Prior to Top Gun: Maverick’s release, there were theories that it will end with the death of Maverick. The marketing campaign for the film leaned on this idea, which heightened the public’s emotional investment in the film. While Maverick survived the events of the movie, a new video from How It Should Have Ended shows the many ways that he could have met his demise in the film which would have led to his reunion with Goose in heaven. Watch the hilarious video below:

Related: Where Is Kelly McGillis In Top Gun 2? Why Charlie Doesn’t Return

Top Gun: Maverick gave Maverick the happy ending that he had wanted for so long. After struggling to find his place in the Navy following several blunders that were cleaned up by Iceman, Pete Mitchell is able to get back to the good graces of the organization thanks to his team successfully carrying out their highly-classified mission. Amid his professional comeback, his personal life couldn’t have been any better. Aside from patching things up with Rooster, he also rekindled his romance with Jennifer Connelly’s Penny Benjamin. Overall, Top Gun: Maverick left Maverick in a great place.

Admittedly, Top Gun: Maverick could have functioned as the perfect franchise ending. While the sequel introduced a new breed of pilots in Rooster, Hangman, and Phoenix among others, Cruise can walk away from the franchise knowing that it had a fantastic ending. But, as a studio, Paramount may not share the same sentiment. Seeing how widely successful Top Gun: Maverick has been, it will understandably want to take advantage of its popularity by greenlighting Top Gun 3. At this point, no official word has come that the threequel is moving forward, but it’s safe to say that it’s only a matter of time before it does.

After Maverick reconciled with Rooster in Top Gun: Maverick, the franchise will now have to fully leave Goose’s tragic death in the past and stop incorporating it in any of its future storytelling. Instead of looking back, the burgeoning film series should focus on what’s ahead of it. Aside from what lies in Maverick’s future, it should also continue building up Rooster and Hangman as its next leads.

Source: How It Should Have Ended