“Topdog/Underdog” is on Broadway for 16 weeks. We found tickets for $75 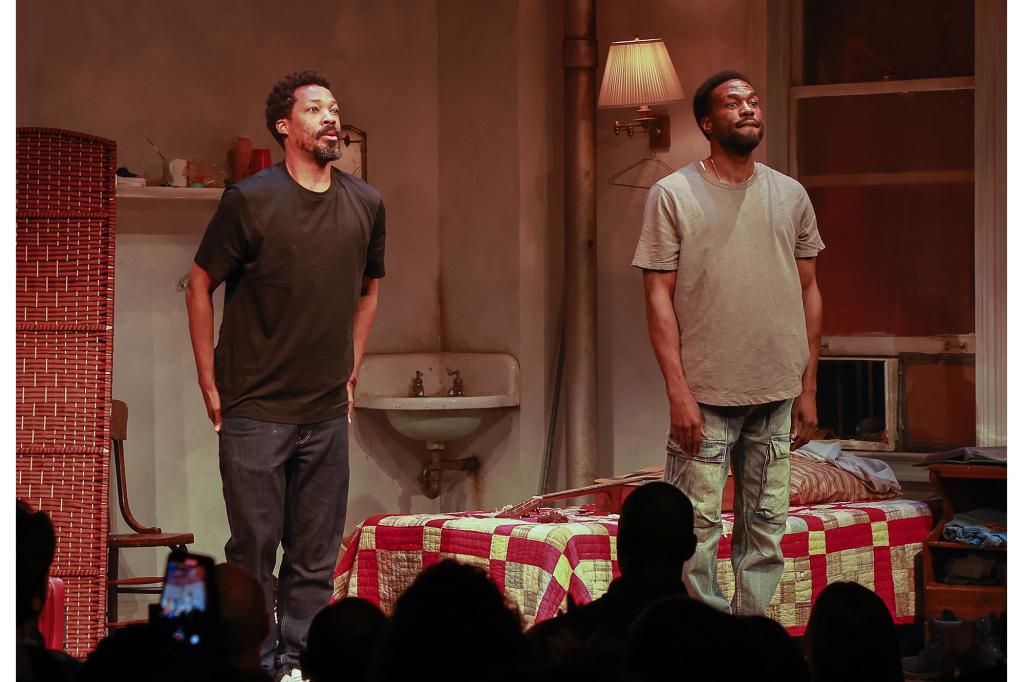 Vivid Seats is the New York Post’s official ticketing partner. We may receive revenue from this partnership for sharing this content and/or when you make a purchase.

That’s because the fiery, new production of “Topdog/Underdog” starring Corey Hawkins (“Straight Outta Compton”) and Yahya Abdul-Mateen II (“Candyman”) has been electrifying audiences since it opened on Oct. 20.

“Topdog/Underdog,” back on Broadway for the first time since it debuted in 2002 with Don Cheadle and Jeffrey Wright in the lead roles, tells the story of ironically-named brothers Lincoln and Booth.

The duo — the only actors in the play— laugh, argue and cope in Booth’s (Mateen II) one-bedroom apartment after his wife throws Lincoln (Hawkins) out.

So, if you want to see this alternately comedic and dramatic show live, you still can.

However, that opportunity is only available for just a few more months.

Luckily, tickets are still available for all remaining shows.

In fact, we found seats going for as low as $75 before fees on Vivid Seats for select shows.

Vivid Seats is a verified secondary market ticketing platform, and prices may be higher or lower than face value, depending on demand.

They offer a 100% buyer guarantee that states your transaction will be safe and secure, and your tickets will be delivered before the event.

All prices listed above were found at the time of publication and are subject to fluctuation.

Showings of “Topdog/Underdog” take place Tuesday through Sunday at the John Golden Theatre.

Evening shows start at 7 p.m. on Tuesday through Thursday. On Fridays and Saturdays, curtains come up at 8 p.m.

For those who prefer matinees, you can catch “Topdog/Underdog” on Wednesdays and Saturdays at 2 p.m. and Sunday matinees beginning at 3 p.m.

A complete calendar featuring all show dates, start times and links to buy tickets can be found here.

“Topdog/Underdog” runs two hours and 15 minutes with an intermission.

The minimalist production is a true two-hander — Hawkins and Mateen II are the only actors to appear onstage.

Here’s a bit more about both stars and “Topdog/Underdog’s” writer and director.

Corey Hawkins: Although known primarily for his work on the silver screen, Hawkins is also a Tony Award nominee for his role in 2017’s “Six Degrees of Separation.” Over the past few years, you may have seen him in the film adaptations of “Macbeth” and “In The Heights.”

Yahya Abdul-Mateen II: You might recognize Mateen II from his Emmy Award-winning performance in HBO’s “Watchmen,” but for those paying close attention, you’ll recall he was also in “Ambulance,” “The Matrix: Resurrections,” “The Trial of the Chicago 7” and many more. “Topdog/Underdog” is his Broadway debut.

Suzan Lori-Parks: The play’s writer and director has received a Macarthur “Genius” Award, been declared a “Master Dramatist” by PEN America and won the Pulitzer Prize for “Topdog/Underdog.” Outside of theater, she penned the screenplay for the 2021 film “The United States vs. Billie Holiday.”

Kenny Leon: A veteran of the stage, Leon has won a Tony for directing, as well as an Obie Award and an NAACP Image Award. Just a few of the productions he’s helmed include “A Soldier’s Play,” “Children of a Lesser God,” and “A Raisin in the Sun.” He also authored the book “Take You Wherever You Go.”

Although it’s cold outside, Broadway season is sizzling in Midtown, New York.

Here are just five of the buzziest shows you won’t want to miss live in the next few months.

Share
Facebook
Twitter
Pinterest
WhatsApp
Previous article
Mel B ‘shocked’ by racism in the US while filming documentary: ‘It changed my outlook’
Next article
Confessions of a bank robber: Ex-con reflects on heists and life

Reba McEntire 2023 tour: What to know about tickets, prices, schedule